What’s New In My Kitchen – Sourdough 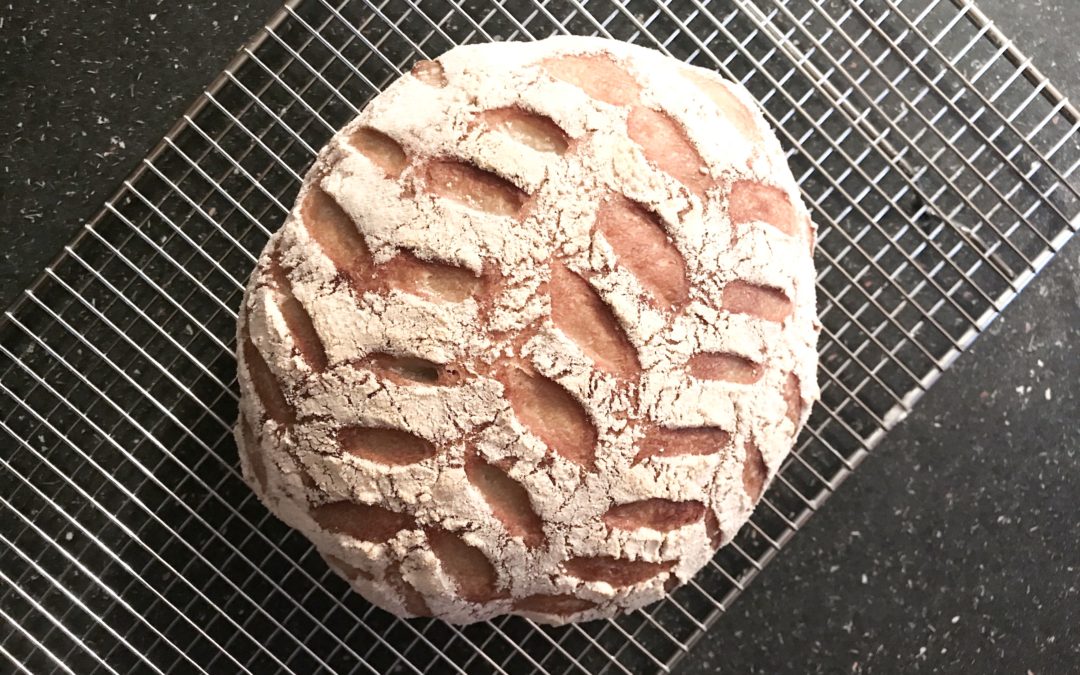 I’m so excited to start a new blog series – What’s New In My Kitchen!! Each month, one blog post will feature something that is new in my kitchen. It might be a recipe, a specific dish, a kitchen item, tip or anything else that is new in my kitchen! We spend A LOT of time in the kitchen and I easily get bored with doing the same things, so maybe this will also encourage me (and you too) to try new things!

Even though it’s March, I’m going to dedicate this “What’s New In My Kitchen” post to January/February. Months ago I was inspired by Kate from @venisonfordinner to try making sourdough. Even though sourdough is good for you, apparently it is easier to digest, the real reason I wanted to try making it was because it looks so pretty. Yes, I realize that may be shallow, but it’s the truth! It just looked so fun and I wanted to make pretty bread!

Kate has several sourdough recipes on her blog, I haven’t actually tried them, but I have tried several other recipes and LOVED them all: Big Dutch Babies, Chocolate Toffee Squares, Rustic Fruit Tart (pictured below, SERIOUSLY AMAZING) and Ranch Dip Mix. 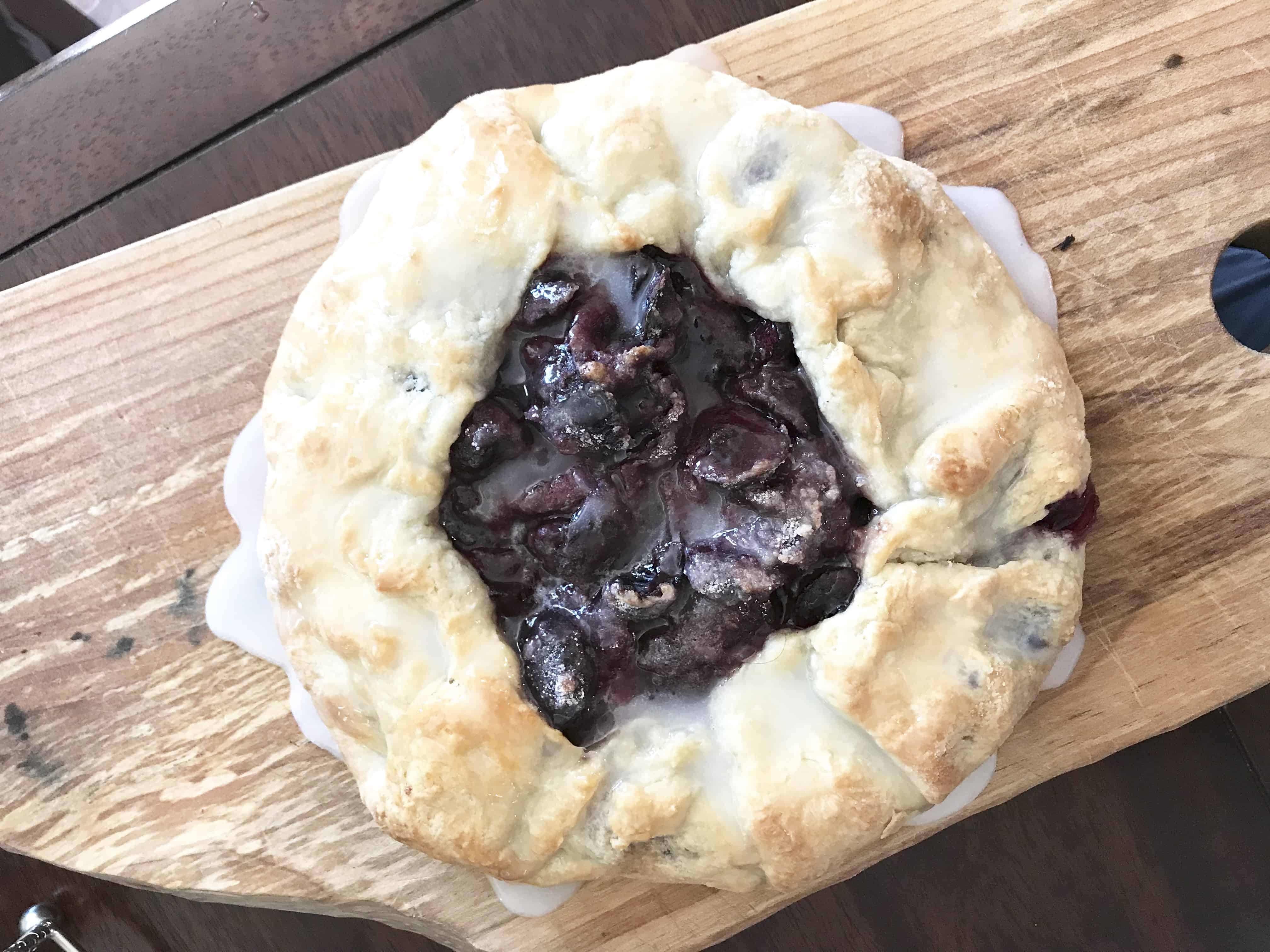 Although I knew I wanted to make “pretty bread,” I was also swamped at the time with fall trade shows and Christmas so I decided to make it my 2019 goal. On New Year’s Eve, I was helping set up at the local community hall where my parents live and ended up chatting with their neighbour about sourdough. She’s an amazing baker so I asked if she had sourdough starter. The next day I was walking over to her house to pick some up! Now I really had to make it!

I was super hesitant to try making it because it was something new, unfamiliar and I just wasn’t really sure where to start. Well, I’m here to tell you it really isn’t as intimidating as it seems! All you need is sourdough starter and a good book!

For starter, you can make it yourself, but I’d suggest just getting some from a friend. If you don’t know anyone who has some, try posting on a local buy and sell group, I’m sure you’ll find someone who would love to give you some! If you’re local and want some, let me know! I purchased Artisan Sourdough Made Simple from Amazon (another one of Kate’s recommendations – thank you Kate), and it is just perfect! I am NOT a recipe following kind of person. If anyone can mess up a recipe it’s me, but this book is super easy to follow. Actually… I did lend it to my neighbour and it didn’t turn out as well for her, but she was measuring instead of weighing. I don’t know if that made the difference (the book does give weights and volumes, but I have weighed all ingredients so far).

Having said that, I have tried several recipes and have loved them all so far! Everyday Sourdough, High-Hydration Sourdough, Cinnamon Raison Swirl, Pickled Jalapeño, Cheddar and Chive and Whole Wheat Sourdough. 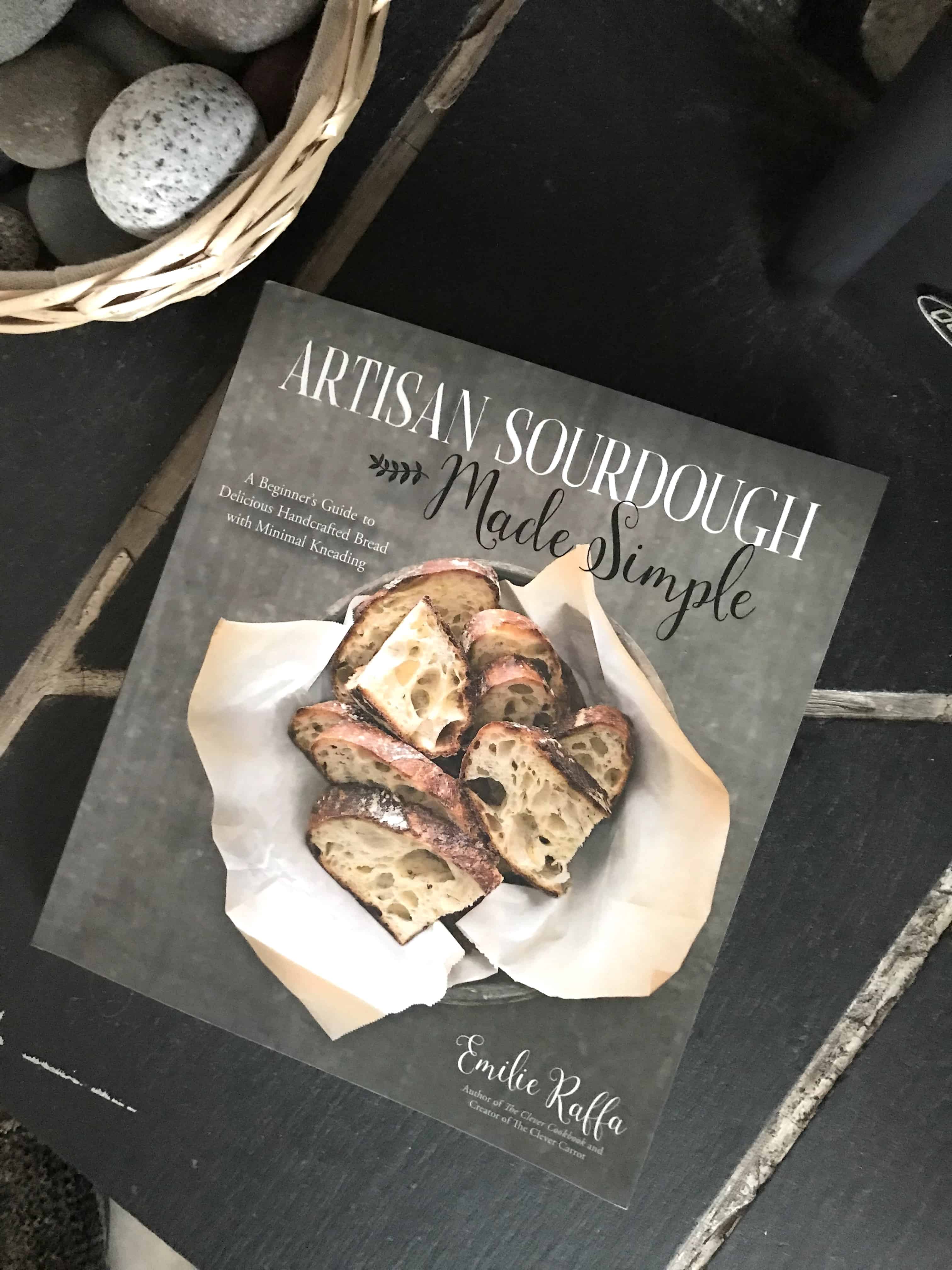 I have loved learning something new, scoring pretty designs and sharing freshly baked bread with friends and family. When I made my first one I was so nervous it would not turn out. I thought for sure it would be a flop. When I took it out of the oven, I screamed and grabbed my daughter, giving her a huge hug because I was seriously THAT excited! Adult life at it’s best, haha!

This is my favourite design so far! 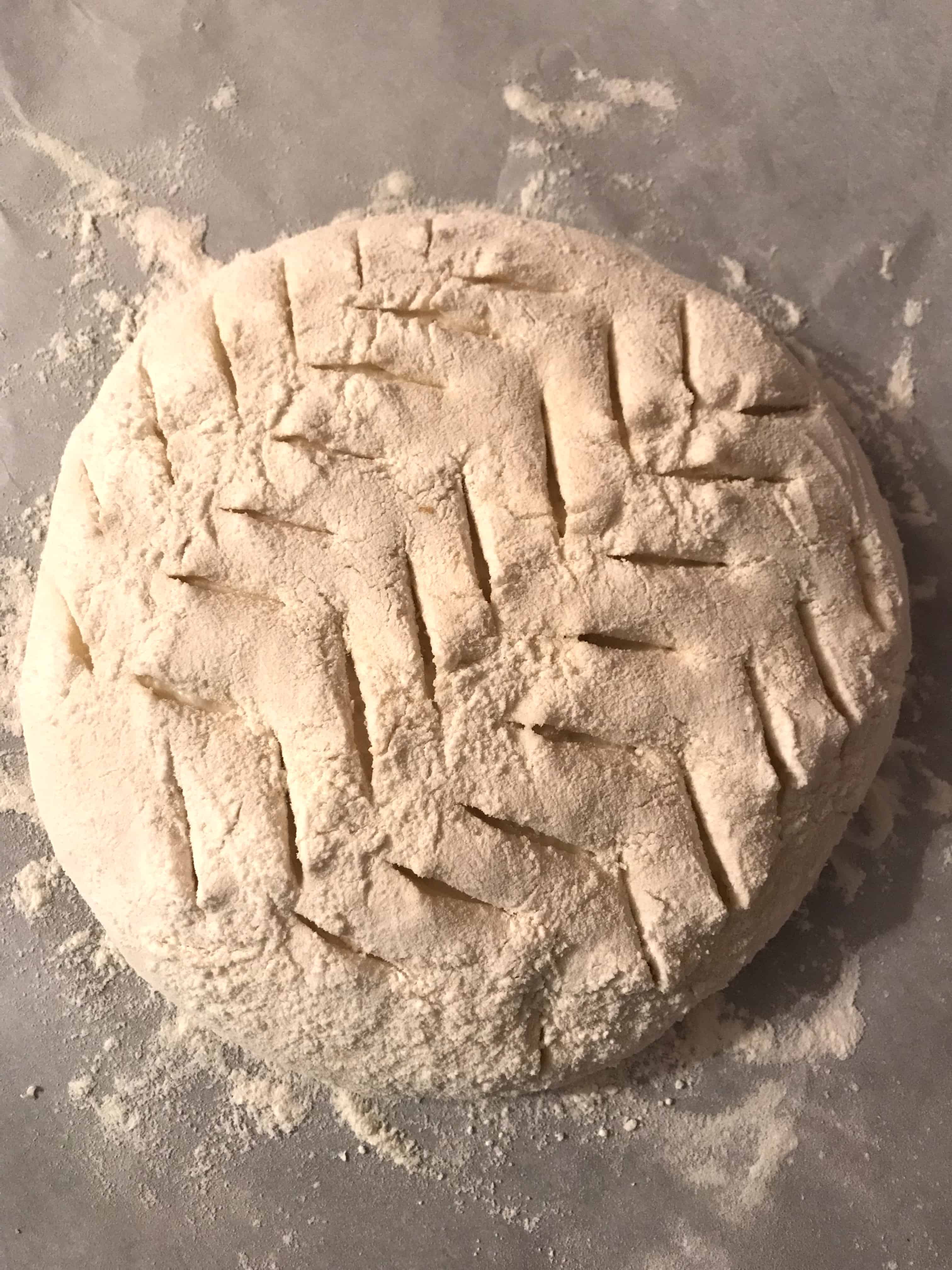 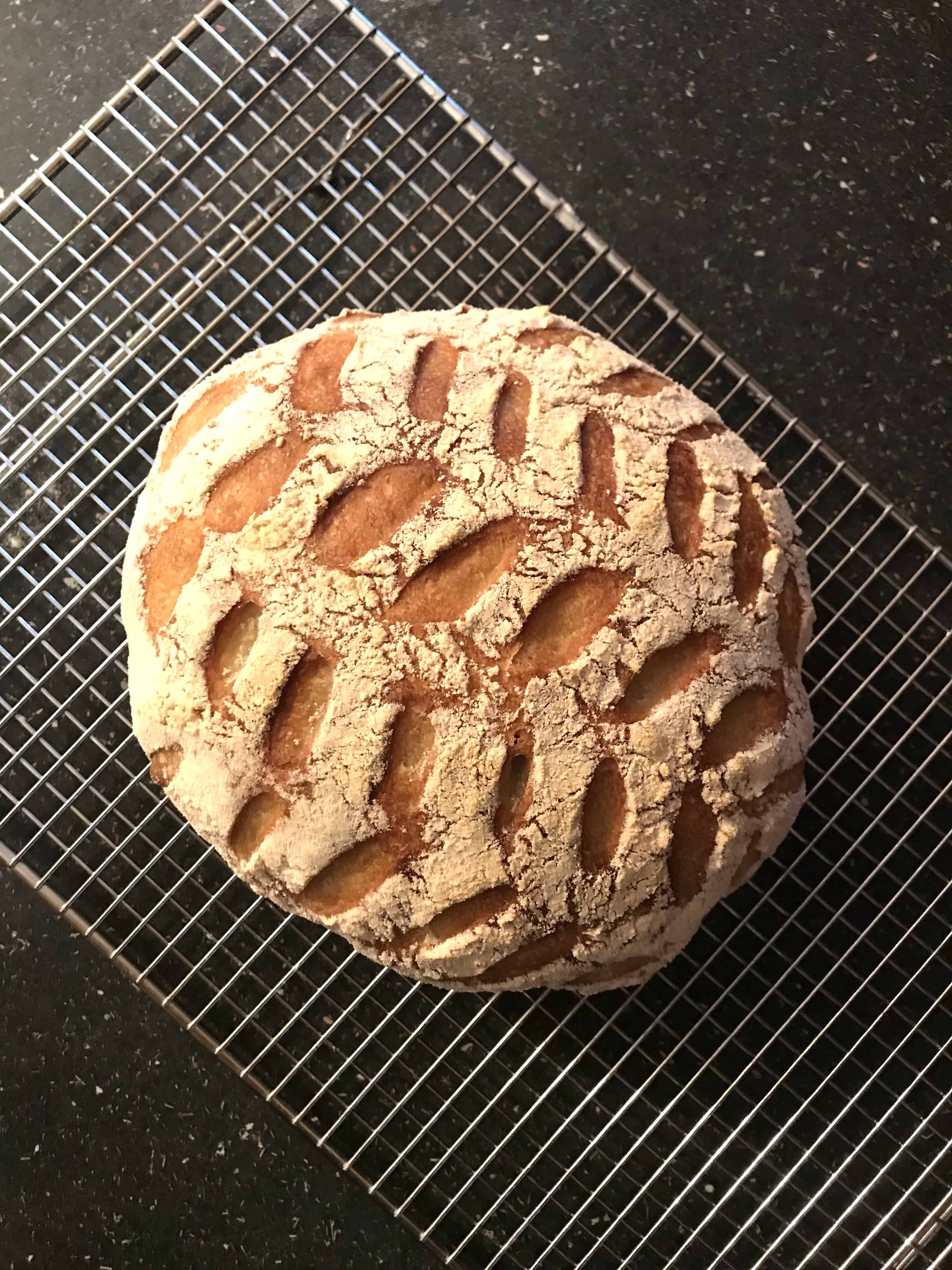 I started out by making it once a week. I would start Saturday night and bake Sunday morning, but since my husband has been home I’ve been making it more frequently. He was curious, so I also showed him how to make it and we did the Roasted Garlic and Rosemary one together. It was delicious, of course! It really is a simple process, it doesn’t take a lot of time, but it takes planning. It isn’t something that is ready in a few minutes. I promise you though, it really isn’t complicated and it will bring joy to your kitchen!! I also can’t recommend that book enough! I haven’t tried any other book or any other recipe, but what I have tried is working so I’m going to stick with it for now!

As for baking it…

I prefer using a dutch oven, but I only have a circular one, so for the oval shapes I have just used a roasting pan or casserole dish. I find the outside a little crispier, but it’s still good. Maybe one day I’ll get a second dutch oven, but for now, this works!

This is my first one, just getting out of the dutch oven! 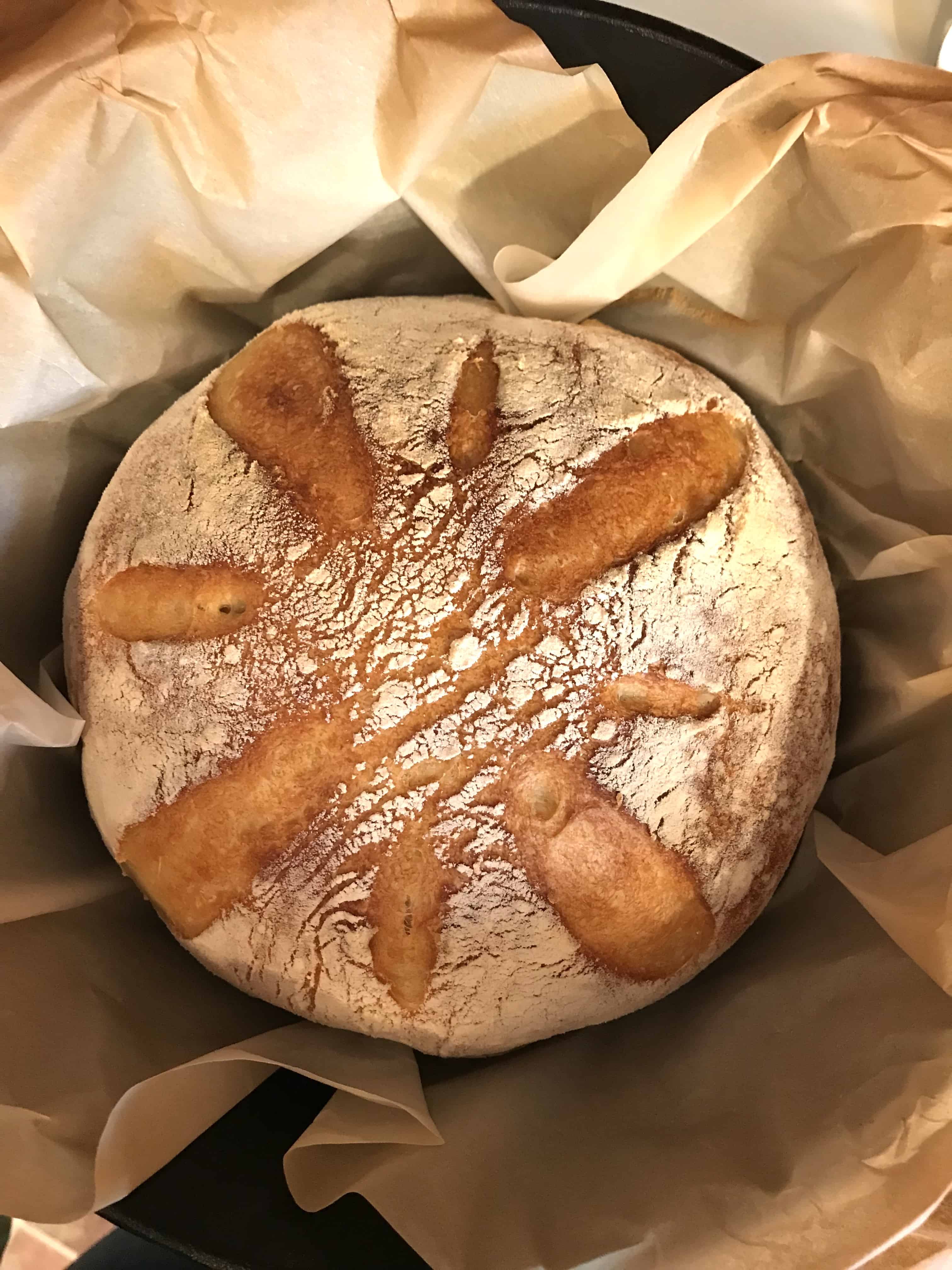 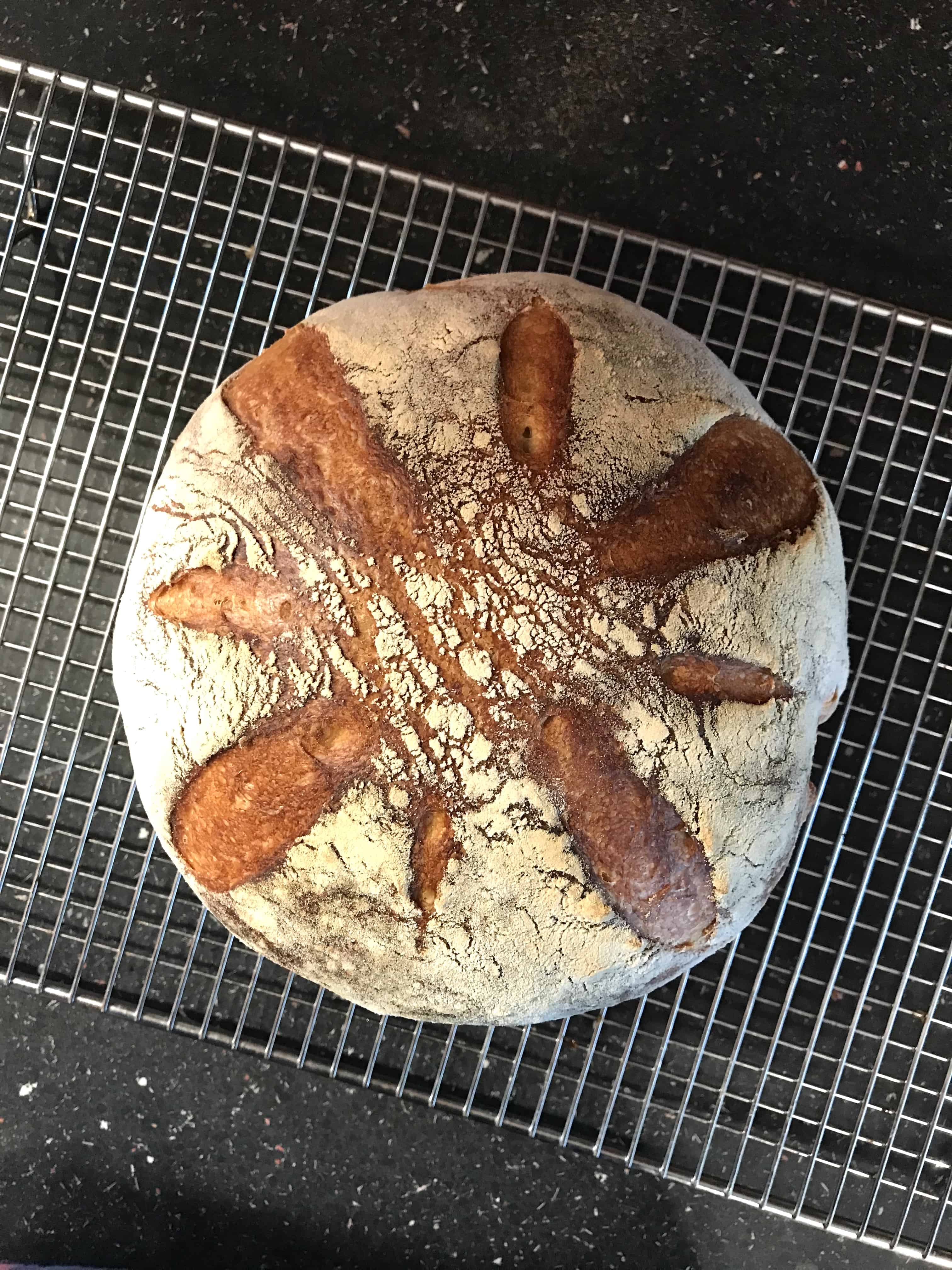 This is the casserole dish and roasting pan… Cinnamon Raisin Swirl. When it’s a couple days old, it makes awesome toast and when it’s a few more days old it makes even better french toast, just soak it in the egg mixture a bit longer! 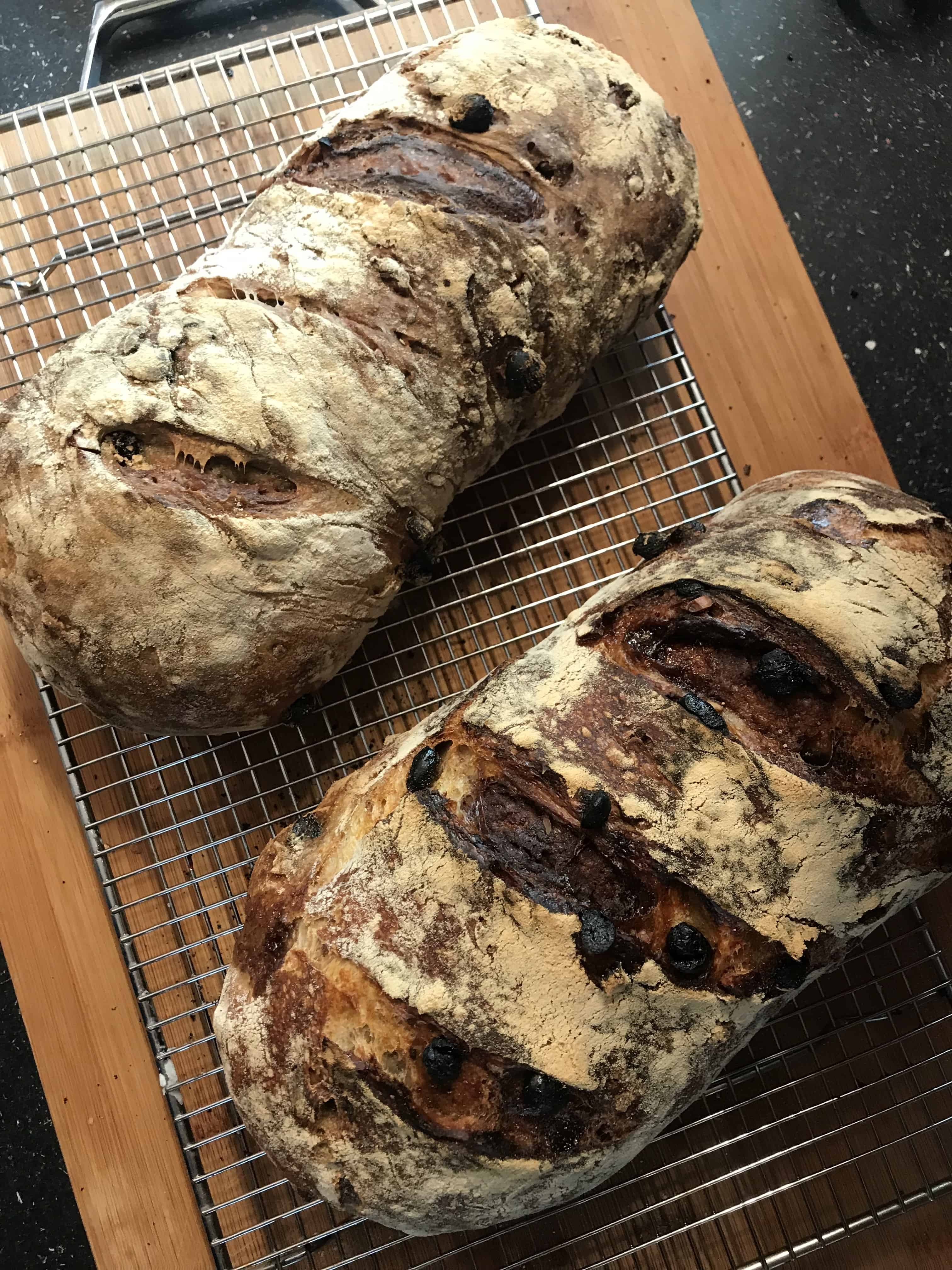 One of my favourite lunches… fresh bread, cream cheese, smoked salmon (my hubby made this one), topped with fresh dill! Yummy! This was a great opportunity to use up some smoked salmon we had in the freezer. This past month I have been shopping our freezer and pantry and only buying fresh foods! I’ll share how that’s going in another blog post!

PS. This is the Pickled Jalapeño, Cheddar and Chive recipe and I think it’s my favourite so far. It has bite, but it was extra moist and I loved that. I skipped the chives and added extra jalapeños too. 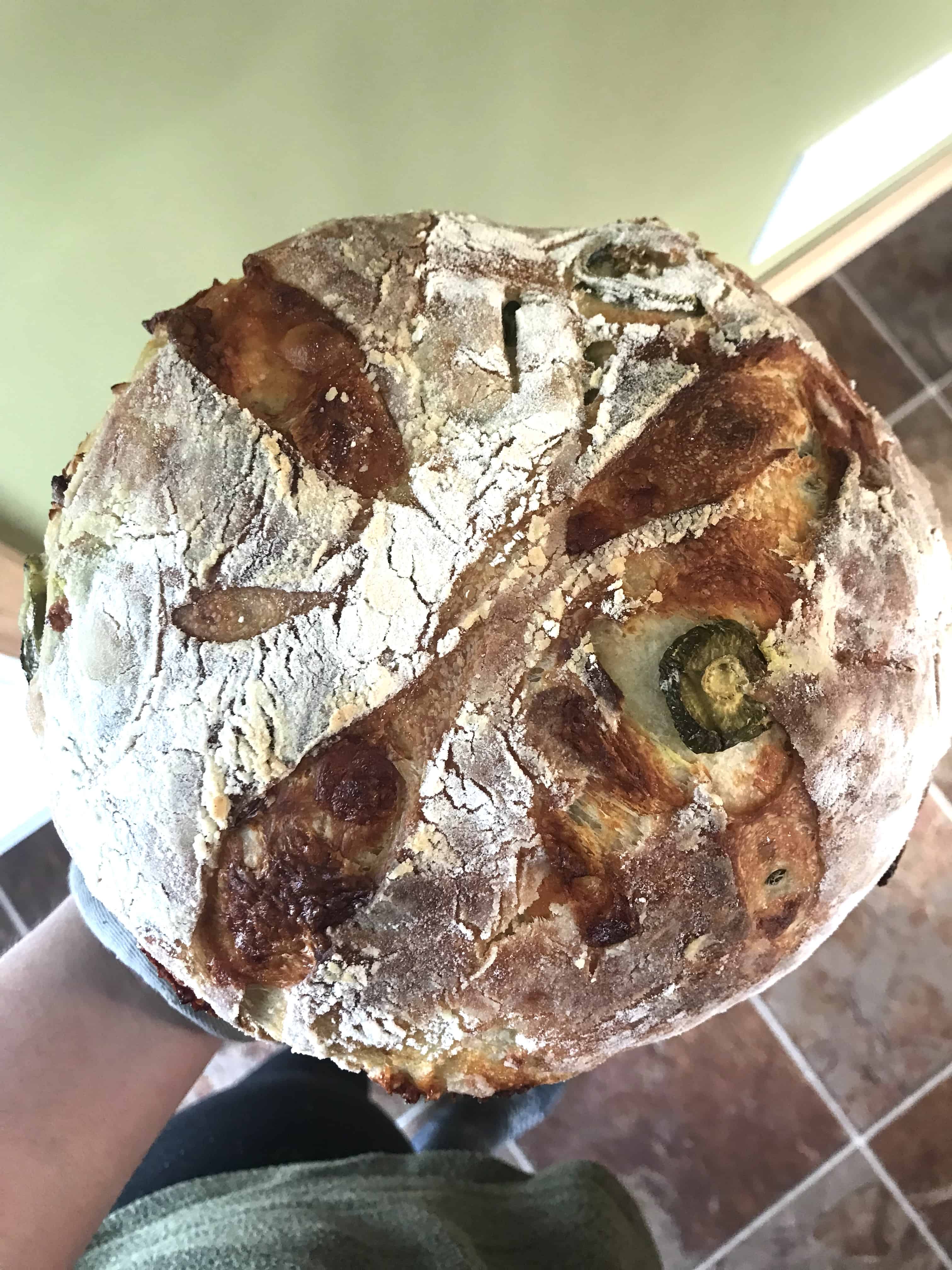 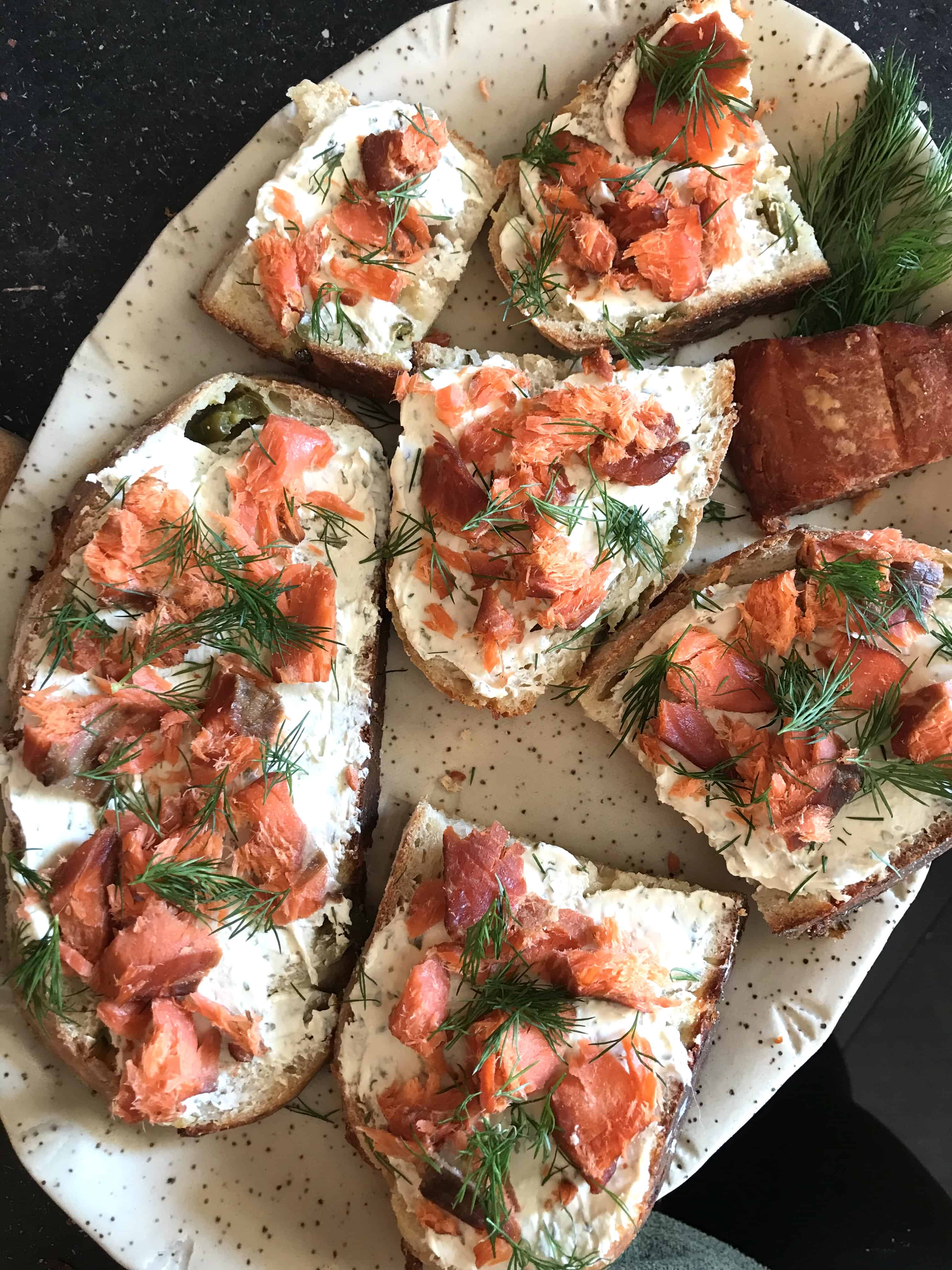 You don’t need all the fancy things …

As tempting as it is to buy all the fancy things to make the prettiest bread, you really don’t NEED it. I have made do with my one dutch oven and whatever other casserole and baking dishes I have. That’s not to say that one day I won’t buy a few things, like maybe a banneton or two, but for now, I can still make sourdough (I use our wood salad bowl or whatever basket I can find at home)! I would say a good book or recipe is a must though so if there is one thing to buy, that’s what I would recommend. The only other thing I did buy was a good sharp knife for scoring because we have terrible knives at home. I bought one for under $10, or maybe it was about $10, from our local kitchen store. It is a small serrated knife and works great. As long as you have something sharp I’m sure you’ll be fine.

Another TIP, make sure to use really good flour so the starter has lots to eat! I use Anita’s Organic Flour and it’s been great.

A few links to get you started! And a few more, in case you are the type of person who does like to buy all the things! I haven’t ordered the bannetons, but hopefully one day! 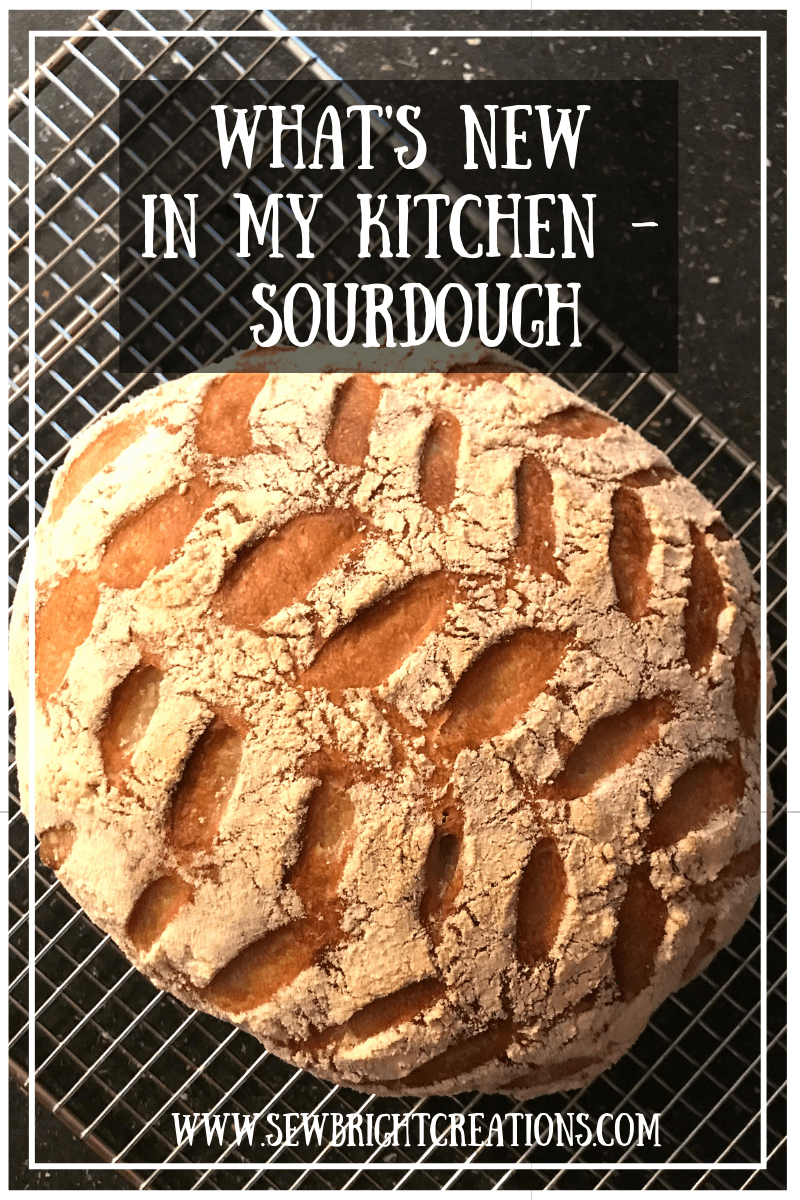 It helps to share this blog so others can see and it’s much appreciated!

Did you see how I make bone broth? Check out my last post to read how you can easily make it too! Click HERE!